When we left Florida last April for our summer workamping jobs we had every intention of moving on to Amazon when we were finished at Darien Lake. Somehow we let fellow workampers convince us to try the Sugar Beet Harvest in North Dakota instead. As promised here is our "unbeetable" tale.

I can take credit for only some of the included pictures. Cell phones were a "no-no" at our job site and most of the time it was too dark for pictures. A big thank you to those whose pictures I "borrowed".


What is a sugar beet?


The sugarbeet is a root crop that flourishes in temperate climates where the growing season is about five months long. One of the largest concentrations of growers is in the Red River Valley, located in eastern North Dakota and northwestern Minnesota. American Crystal Sugar also has growers and facilities near Sydney, Montana. Beets are planted in late March/early April and harvested in late September and October. When fully grown, a sugarbeet is about a foot long, weighs two-to-five pounds, and is about 18% sucrose. 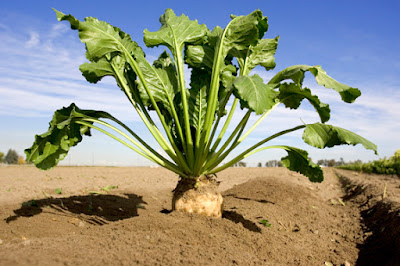 This is a mature sugar beet. 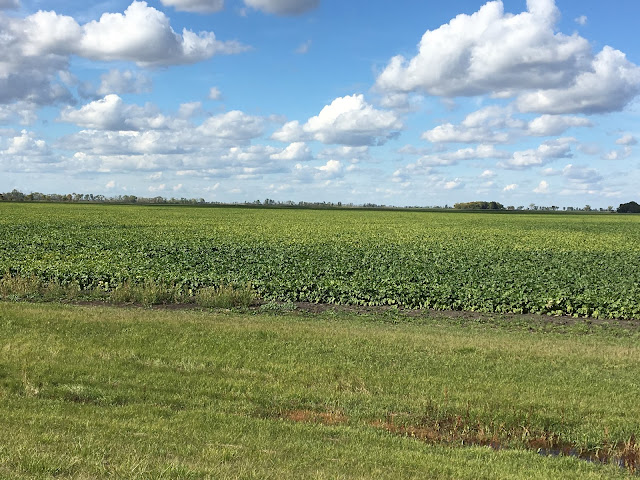 This is what the ND sugar beet fields looked like when we arrived at the end of September. 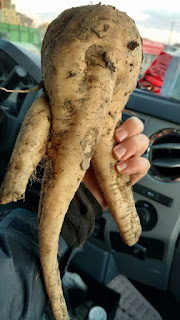 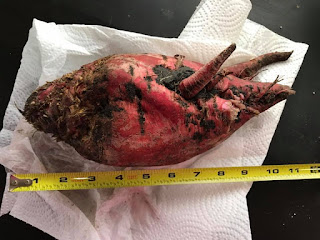 Sugar beets are often odd shaped and occasionally even red in color.

How are they harvested? 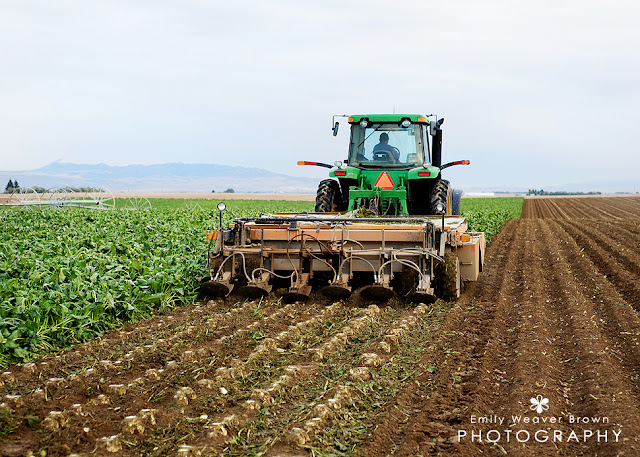 When the beets are ready to be harvested a "beet topping" machine slices off the green tops. 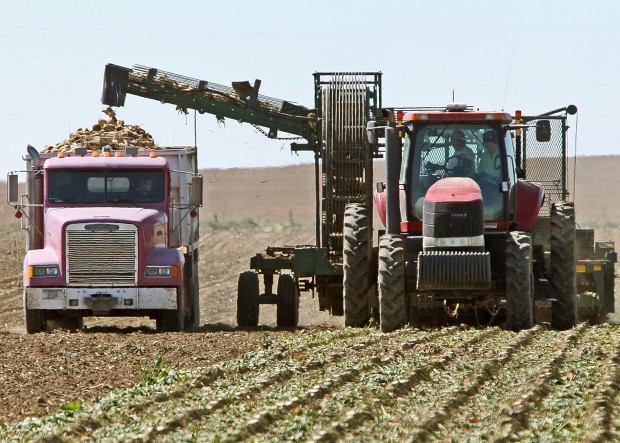 The sugar beet root is then harvested with a pinch wheel harvester, which pinches the root and lifts it from the soil. The sugar beet harvester also removes some of the soil and conveys the sugar beet into a truck to be transported to a receiving station.

What happens at the receiving station?


We worked at the receiving station in St Thomas, ND. This facility was located about 11 miles north of our campground and about 30 miles south of the Canadian border. We worked the night shift (not by choice) from 8pm to 8am. 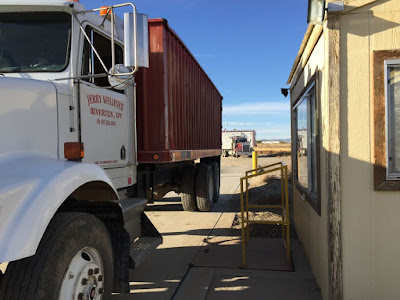 Once at the receiving station the driver's first stop is the scale house. There the beet loaded truck is weighed and the driver is assigned to a piler for unloading.

A piler is a very large piece of machinery that transfers the sugar beets from the loaded truck to a storage pile which will be about 18-20 feet high and about 1500 feet long by the end of the harvest. You can see part of the beet pile at the right of the top picture. There were 4 of these pilers at our receiving station. This is the #2 piler that we were usually assigned to. Each piler has 4-5 crew members. The piler operator sits in the little yellow booth at the back of the piler (bottom picture). She/he operates the levers and switches that control the total machine. The boom operator maneuvers the long conveyor belt/arm at the front of the machine (top picture). The rest (ground crew) direct the trucks, bag beet samples and clean up dirt and spilled beets. We were ground crew. 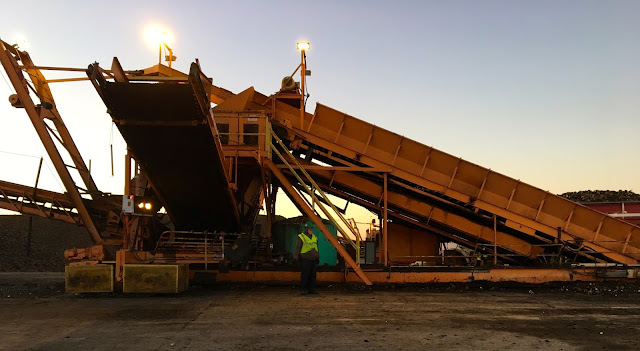 Bob waiting for a truck as the sun begins to rise. 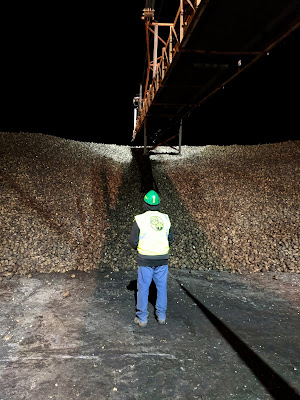 Boom operator keeping an eye on the boom to be sure the beets are being deposited uniformly and the boom is not in danger of getting stuck in the beet pile. The boom swings from side to side and can be reversed in small increments as needed. The piler operator reverses the entire machine as the beet pile grows. 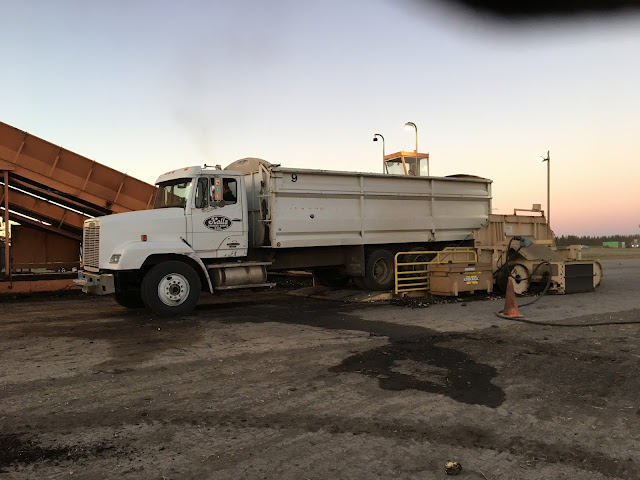 Drivers can unload their beets on either side of the piler and a truck has arrived on our side! The piler operator uses lighted signs to help the driver park his truck in the correct position. Back gate is raised, hopper doors are opened and the piler's conveyor system is started. Trucks use either a belt driven system (above) or a dump system (below) to dump their load of beets into the hopper. 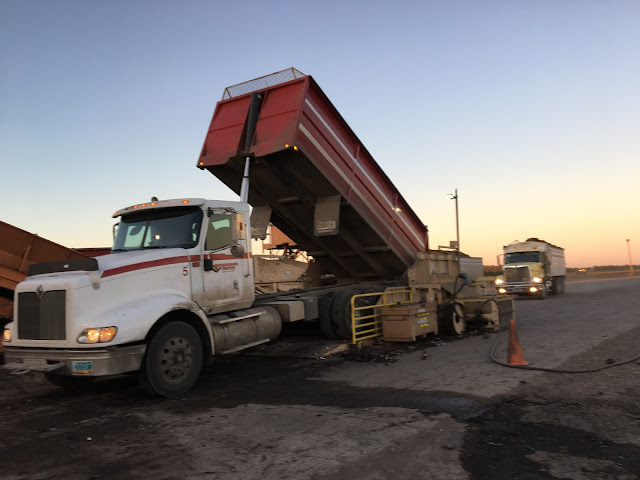 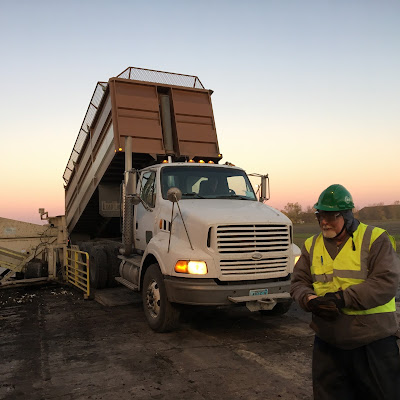 Bob has checked the driver's paperwork and written the piler # on the paperwork. The driver did not have a sample ticket so Bob didn't have to fill a tare (sample) bag. The sugar content of each grower's beets is measured by testing the collected beet samples at a nearby lab. 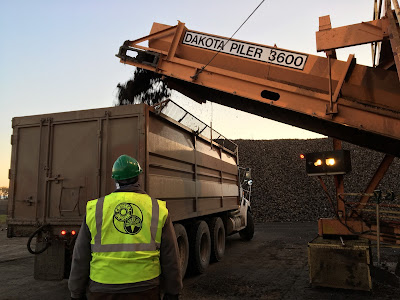 From the hopper the beets travel on a conveyor through the machine and along the boom until they drop off onto the growing pile. Dirt is sifted off the beets as they travel along and is collected and returned to the truck after the truck has been unloaded. The drivers stop at the scale house on their way out to turn in their paperwork and be re-weighed. Initial weight minus dirt weight equals beet weight. This coupled with the percentage of sugar obtained from the beet sample determines the farmer’s payout. In the above picture Bob is monitoring the dirt return and will motion to the driver when return is complete and it's time to leave. 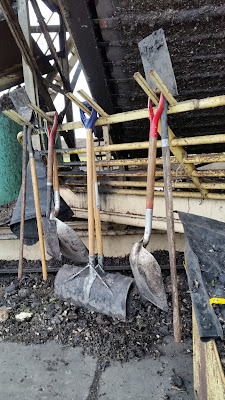 Once the truck departed our job was to clean up any left behind dirt, mud and spilled beets. The dirt looked so rich and fertile in the fields but was actually a combination of black soil and heavy clay and it stuck to everything, especially boots! We joked that everyday we grew at least an inch in height between arrival and departure. Bob and I used a heavy duty putty knife to scrape the bottom of our boots at the end of every shift.

By the end of the harvest all 4 of the St. Thomas beet piles looked like this one. That's a lot of beets! The beets will remain in these piles until the nearby sugar plant is ready to process them.

The St. Thomas receiving station is one of about 45 stations owned by American Crystal Sugar in ND, MN and MT. These facilities operate 24 hours a day/7 days a week until the last sugar beet is harvested. Just imagine all those piles of beets! 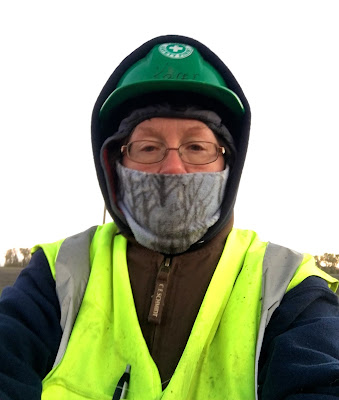 My usual working attire and you are viewing only the top layer! There were several other layers underneath. By the time we left the nightly low's were in the lower 30's/upper 20's.

The ND beet fields on the day we left, October 15. All tilled and ready for spring.


The following link features a great video about the St. Thomas receiving station. Even though the video was made in 2015 not much was different in 2017. Enjoy!

Would we try the "Unbeetable" Experience again?


We have been asked that question many times and my answer is always the same . . . no.

Don't get me wrong, I'm very glad we took this opportunity to try something outside of our comfort zone. We did not find the work difficult or overly strenuous. It took a little time to adjust to a night shift schedule but we managed. We even survived the 14 days in a row/12 hours per day schedule! But for me, the biggest hurdles were the weather, too much down time and other crew members' attitudes. Once the sun set the temperature dropped rapidly and continued to drop until dawn. The cold could have been combated with multiple layers of clothing and a steady flow of truck traffic but for some reason piler #2 was often the "forgotten stepchild". Truck traffic became so sporadic that our crew resorted to waiting in the cars until a truck actually came to unload. Sounds like an excellent solution, right? Unfortunately a warm car in the wee hours of the morning was not necessarily  a good combination. Both Bob and I found it difficult to keep our eyes open and once I actually had to go and wake up the piler operator so the incoming truck could unload! Being part of a crew that enjoys each others company, looks out for each other and works well together can help an unpleasant experience become more pleasant. Our crew was difficult to work with and we were definitely the "outsiders".

However there were definite positives to this job.

Positive #1: As promised the pay was decent for 2 weeks of work. Both Bob and I worked 14 consecutive 12 hour night shifts. Bob logged 171.25 hours and for some reason I logged 171.50 hours. I'm not sure how I ended up with more as we clocked in and out together! Base pay was 13.25/hr. Monday - Friday we earned 13.25/hr for the first 8 hours of our shift and 19.88/hr for the remaining 4 hours. Saturday was 19.88/hr for all 12 hours. Sunday was 26.50/hr for all 12 hours. We also earned a 5% end bonus for completing our contract. So we ended up with a nice little cache of extra money. And the cost of our campsite and utilities was covered by our employer.

Positive #2: Somehow throughout all our rv adventures we had never visited North Dakota or Nebraska. Traveling to and from this job we were able to add both states to our travel map.

Positive #3: Our cache of extra money allowed us to continue on our travels and revisit some favorite locations before heading back to FL.

Positive #4: Grafton was a pleasant little town with several restaurants, a well stocked grocery store and other amenities. It was just a short drive to the St. Thomas receiving station. We were also fairly close to Grand Forks for major shopping. Our campground was clean and quiet.

Positive #5: If we were to return for the 2018 season we would be assigned to the day shift. No more bitter cold and long dark nights. Being experienced "beeters" we would have input in the crew selection process.

Workamping gives us the opportunity to try new experiences, explore new places and if we aren't 100% satisfied move on. So on to our next adventure!

Posted by Karen Swain at 9:46 PM No comments: